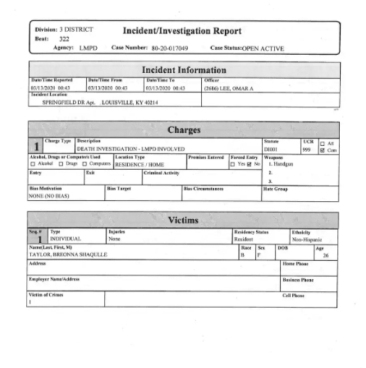 On Wednesday, Kentucky Attorney General James Cameron presided over Breonna Taylor’s grand jury case. Out of the three officers who fired a combined 40+ shots in the middle of a March night (12:40 A.M.) only one was found guilty. Brett Hankison received a fourth degree felony wanton endangerment charge for the damage he inflicted to neighboring properties. Myles Cosgrove and John Mattingly will walk.

The issue to focus on here is: the discrepancies in justice from all different angles.

President Donald Trump has stated that Daniel Cameron is, “handling the matter very well and sticks to uphold only “the facts and the law.” (MW)

Trump’s statement – much like the verdict – lacks context. Rather than applauding Cameron for handling multiple investigations, city barricades and national news + FBI presence his vague statement only leads to further flame fanning.

Trump has been complaining of ballot fraud, while also showing opposition to a potential peaceful transferral of power.

Suffering, pain and agony continues to flood the hearts of anyone affected by Breonna Taylor’s tragic occurrence.

A 2015 study by Bryan Patrick Schaefer found that for 73 warrants studied, all 73 warrant served by the Louisville Police Department with a battering ram. (UL)

Why middle of the night a tangential witness to investigation?

Why altered times on police reports?

Warrant activity began in January why wait until March to serve?

Why was there not additional information/connection to establish Taylor’s involvement in alleged drug conspiracy?

Despite surveillance on her home at 3003 Springfield Avenue (no outward facing cameras), police were unaware that anyone other than Breonna Taylor would be present upon serving their no-knock warrant. Prior to arrival, they did not have any concrete evidence that would pose Taylor as a danger/threat.

“(There were) two volleys of gunfire that night, and they were about a minute and eight seconds apart,” Romines said. “It was not reported that an officer was shot until after the second volley of gunshots … Until we see the ballistics report, we think it is much more likely that one of the 35-to-45 shots fired by LMPD is what struck Officer Mattingly.” (WILW)

In the eyes of Daniel Cameron, Kenneth Walker’s unexpected presence coupled with one warning shot into Mattingly’s leg elicited “reasonable force” from these Narcotics officers involved. As per FBI Ballistics, Cosgrove fired 16 shots, Mattingly fired 6 and Hankison fired anywhere near 20-25.

The warrant submitted to Mary M. Shaw was “copy and paste” verbatim for Breonna Taylor and the four other no-knock warrants issued within a 12 minute time span. The officer who submitted the warrant was not present at the scene on that March evening.

There are clearly errors in policing and state legislation only compounded their awful display of community servitude. What a terrible precedent to set…Mary M. Shaw granted those warrants without merit and in defiance of Supreme Court precedent. She will not receive any charges either due to the “Exclusionary Rule” even as the no-knock warrant was deemed illegal by a 5-4 Kentucky state vote.