With all of the human beings on Earth, it can be difficult to differentiate yourself. A major part of standing out deals with your genetic makeup, upbringing & the place in which you grew to become familiar with your surroundings. Clearly, New York is a breeding ground for all kinds of talented individuals. Its’ immensely dense population makes it exponentially more challenging to achieve stardom. The spectacular part about New York, though is that it encourages an unmatched hustle and conceives individuals who have the utmost ambition.

Brooklyn has produced a few legends within its time. Now, I’m not saying she’s quite to that stature yet, but DonMonique is taking all the right steps to disrupt the game. She started  garnering major attention through her fashion choices and photoshoots. For a while, she was modeling for Pharrell Williams on Karmaloop. Her major turning point occurred during a photoshoot in rare FUBU attire that took off on Tumblr and accumulated thousands of notes/reposts. With a fashion outlook, she sets the tone for a high level of crossover appeal and showed people from the beginning that she is stylish and distinctive. Before becoming a hip-hop artist, Don immersed herself within important spheres of influence and made connections with people who are relevant within the genre. Her manager at the time was the one who recommended that she avoid just popping up in studios without anybody knowing her personally. By building rapport, networking and gradually placing herself on people’s radar she was able to experience more success when it came time to getting behind the microphone and releasing new tracks. This whole process took about a year, but it is always important to focus upon relationship building and creating a good reputation for your brand. It is not about who did it first, it is about who did it right.

When it was finally time to burst upon the scene, DonMo captured her moment in all of its glory. A common theme within hip-hop is to replace certain powdery substances with the names of white females. DonMonique was very aware of this and on her first song, “Pilates” she name-dropped Kendall, Kylie and Miley. This song premiered on the Alexander Wang fashion show runway and was conceptualized in Atlanta while she was around for the A3C festival. DonMonique admits that Atlanta sound played an impact on this song’s soundscape as she comes by different sonic approaches honestly. The video for the song was shot in Atlanta as members from Awful Records made appearances and helped boost the visibility of the video.

Pilates took flight when Kylie Jenner posted the song on her Snapchat. Kylie has been known to post fresh new music on her Snapchat account and the fact that this one was quality and mentioned her name must have made a good impression. Either way, people began to take notice of this young Brooklyn artist with only a few songs to her name. Shortly thereafter, she would start working with revered artists such as Danny Brown, Justine Skye and Chuck Inglish. She toured with Lil Debbie, opened Webster Hall for Lil Yachty and got Stelios Phili (the same man who helped produce Ferg Forever) to entirely produce her mixtape, Thirst Trap. Without a doubt, she has that New York pizazz that many covet and few are able to generate.

Discovering her voice was a lifelong process for DonMonique but the thing about her is that she has always been much more than just a face in the crowd. Originality and unmistakable flavor are a few of her redeeming qualities that significantly appeal within the entertainment industry. She is a strong-willed woman who thrives upon independence, confidence and complete control over her trajectory. She takes risks regardless of obstacles, embraces her sexuality and rejects the approval-seeking nature that many women subscribe to in modern American society. With spunk and determination, she is noticeably different from other artists and travels along her path with subversive femininity. 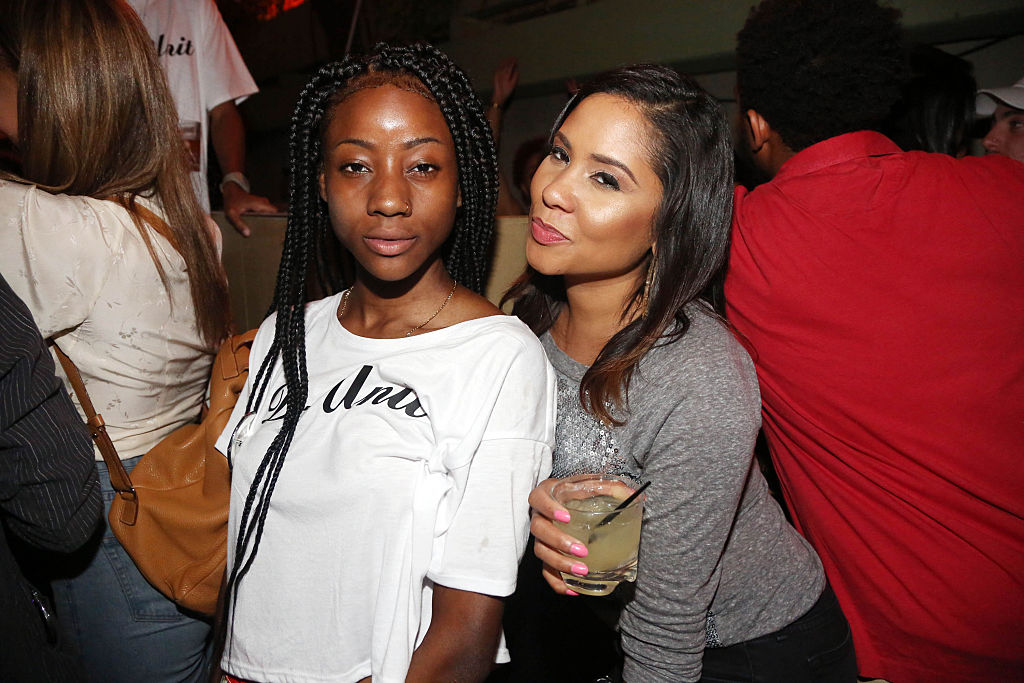 As a youngster, she didn’t fully appreciate music until fifth grade when she played in the band. From there, it did not take much for her to develop her emboldened voice and sense of self. She didn’t listen to much rap growing up because her parents wouldn’t allow it. Instead, she liked Britney Spears and NSYNC. As she got older, she began to admire Notorious B.I.G. Lil Kim, Foxy Brown, Trina and Lil Wayne. She was especially fond of Foxy Brown because of the fact that she never relied on anyone and would collaborate with people without any official affiliation or dependence upon them. With influences such as these, it is clear to see how she gained her heavy-handed lyrical ability and dark, brooding approach on the mic.

DonMonique, or DonDada releases refreshing tunes every time she steps into the studio. She is a great example of how women are dismantling the traditional hip-hop game and dispelling the notion that there can only be one Queen of rap. She appreciates her hometown for its hectic jungle atmosphere, nuances, and grounds for uncontained creativity. With an old soul and a Brooklyn drawl, this artist consistently asserts a quintessential New York sound every time she lays rhymes down on wax.

It is evident that DonMonique is not to be messed with. She is rugged, rough around the edges and a bit tomboyish at times. All of those things serve her well and present an intriguing background and overall differentiation. As a starving artist, she provides gritty bars, deadpan delivery and brash rhymes. With a raw persona, she is titillating, enticing, menacing and most importantly genuine. She is known to be charismatic, versatile, succinct and charming. Being a person who is noticeably different speaks volumes to her audience and those who are in tune take specific notice of her energetic hustle.

When it comes to developing songs, DonMonique takes a minimalist approach. By giving the people just what they need and not a drop more, she keeps the fans honest and insatiable. Her clever verses and raspy vocals have allowed her to wisely navigate the male-dominated industry and reach new wavelengths. As a calm, cool and cozy Brooklyn cat she comes up with music that keeps her audience directly in mind which ultimately boosts her credibility and relatability. She is firmly within the throws of an era where hip-hop connoisseurs are witnessing women gain well deserved respect. As a result, she serves as a symbol of empowerment and advocates about unity for women in the form of uplifting anthems and dialogue.

Her first mixtape, “Thirst Trap” dropped in conjunction with the Hot 97, “Who’s Got Next” showcase. The title plays on the phrase for social media posts that attract viewers and persuade them into leaving desperate comments. It also relates to the fact that her body of music paired with her physical body and outstanding style leaves the audience thirsty for more.

Before dropping her album, Black Kate Moss, DonMo took a bit of a hiatus to appreciate the moment and rejuvenate herself in order to supply the best possible product for her consumers. The release date was pushed back so that she could concentrate on herself, her youth, reflect via introspection and develop her sound further. As a rebirth effort, this move gave her a chance to reevaluate, appreciate the entire process, cherish her gifts and prioritize her health. She is still very young and figuring stuff out after incredible reception from the inception of her career.