As hip-hop and technology inevitably evolve, music videos continue to prove their extravagance. In the modern hip-hop ecosystem, contenders securely distinguish themselves from pretenders. In extraordinary fashion, these A$AP artists have blended vintage vibes with terrific transitions.

A star studded cast accompanies A$AP Rocky in his, “RAF” video modeled after Belgian designer, Raf Simons’ visual lookbook from 2002. His ‘02 Spring/Summer collection donned the title, “Woe on Those Who Spit on the Fear Generation…. The Wind Will Blow It Back.”

Rocky, Playboi Carti, Quavo and Swoosh God shine in this grainy, deconstructed visual tribute. The backdrop was inspired by Raf’s inaugural 1995 Fall/Winter show at the Daniele Ghiselli showroom in Milan.

What makes this video special correlates directly to the utilization of cutting edge visual mediums by Alec Eksander. It’s blurriness and low, VHS resolution provides a vintage visual acknowledgement of the most renown designer to pioneer the industry.

Within the video the artists are draped in luxurious oversized garments. Some of the sneakers modeled are Ozweegos, Platform Laces, Bounce and Super Trekker silos.

Voted one of TIME’S 100 most influential people, Raf Simons exists as a deity to Rocky.

“I feel like Raf Simons is important for the culture based on the fact that he built a whole new religion around fashion.” (A$AP Rocky)

“RAF” premiered on Blonded Radio Episode Six and although Frank Ocean and Lil Uzi Vert are featured on the song, neither managed to appear in the video. Nevertheless, this song (which has two versions) truly illustrates the complexity of visual animation and digitization that has evolved significantly since hip-hop’s origination. 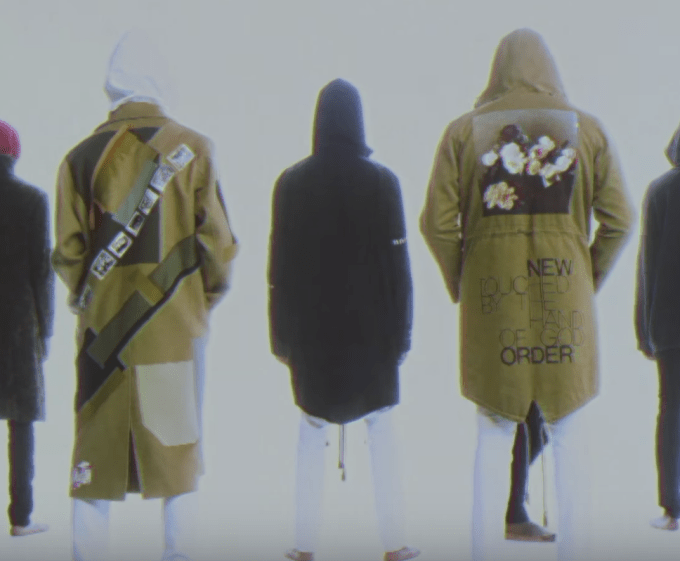