Tauheed Epps, formerly known as ‘Tity Boi’ and currently known as 2 Chainz has made significant strides within his own lane. Since his divergence from Playaz Circle and Ludacris’ label, Disturbing The Peace, 2 Chainz has become an international megastar. Negotiating a new deal with G.O.O.D. Music, he managed to orchestrate the terms of his own contract. Now, his fourth studio album, “Pretty Girls Like Trap Music,” is raising eyebrows with sixteen potent tracks.

“It’s still edgy content, but trap music is defined as low socioeconomic background music where you have to hustle to get out and it’s a situation where a lot of good girls used to like the bad guys, and that’s what this album is about.” — 2 Chainz, The View

This album hits home because it genuinely blends old “trap” sounds and concepts with present viewpoints. “Pretty Girls Like Trap Music” exhibits the importance of willpower and verifies 2 Chainz’ legacy and polished career.

Evidently, Mr. Chainz has caught what seems to be a third wind at the age of thirty nine.Clearly, 2 Chainz has hit his stride and found a way to improve his craft along the way. It is crucial to focus on how this album extends the parameters of “trap music.”

The majority of present day “trap” music shows a lack of substance, thought and introspection. Yet, 2 Chainz is fully aware of his hip-hop surroundings and conducts his musical ventures accordingly. 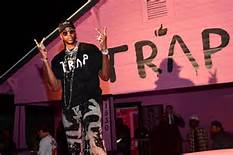 Track 12, “Trap Check,” samples two Southern artists considered kings of trap. Young Jeezy’s “Get Ya Mind Right” sets the beginning tempo for the track, while T.I.’s “ASAP” finishes it with a thumping cadence.

2 Chainz thoroughly explores the dichotomy of being from the “trap” and living a luxurious lifestyle. He has honed his hip-hop skills and uses his experience to piece together precisely produced sounds and songs.

The pivotal turning point in 2 Chainz’ career came when he began to collaborate with G.O.O.D. Music. Songs like, “KO” and “The Morning” particularly stand out. Cruel Summer song, “The Morning” only required four bars from 2 Chainz. Thus, he released his own individual version with two new verses. This man embodies the meaning of hustle and ambition in every way.

He has established a keen sense of self-worth and it truly resonates within the music. Although faced with adversity early on, 2 Chainz portrays how the microphone doubles as a therapeutic tool that led to lucrative opportunity.

However, he did not acquire a myriad of wealth opportunities solely through hip-hop. Apparel like the “Dabbing Santa” sweater and his own brand, “CEO Millionaires” have generated significant income for the Def Jam artist from College Park. He is also a frequent visitor of GQ’s web series, “Most Expensivest Sh*t” which often orchestrates extravagant activities and warm personalities.

A true testament of perseverance, 2 Chainz does not let anything or anyone limit his creative resources. He has been able to will himself and his individual career into existence. In 2007 he was a, “Duffle Bag Boy.” Now, he is the self-proclaimed “King of the Trap.” Not only that, his lyrics helped bring a new luxury automobile model onto the market in the form of the Bentley truck.

“As I met 2 Chainz a few minutes ago—as I gazed into his face—I felt that I was in the presence of royalty, There’s a certain power presence that he gives off.”

Combine the commentary with the nostalgic ‘trap’ samples and prolific guest features, and 2 Chainz delivered an absolute masterpiece.